TUI awards her collaborators in the Car Rental Industry

Опубликовано в: 07.05.2010
Good customer service is the promotional power of TUI Cars (program with which TUI promotes car renting all around the world).
While presenting the «TUI Cars Awards» on Thursday April 29th, 2010 in Hanover, TUI Cars honors the quality of services of more than 100 collaborators globally.
“For our collaborators, the «TUI Cars award» is a huge motive in order to provide our customers with the best possible customer service and maintain the excellent image of TUI Cars in the German market” explains Mrs. Beate Kuszewski who is in charge of the market development and the quality management in the car rental industry of TUI in Germany.
The criteria for the prize nomination pertained three associate categories according to the number of reservations they catered to. Thus, TUI Cars gives the opportunity to all of her associates to win, irrespective of the volume of reservations they attain.
The basic criterion for the award was customer satisfaction which is estimated by the index of the number of reservations to the number of complaints.
In 2009 Hertz Greece achieved the best result in the first category (with the highest number of reservations amongst all the TUI associates) achieving an index of customer satisfaction of 99.8%!
This award has been nominated since 2003 and for this purpose the General Manager of Autohellas – Hertz, Mrs Emmanuella Vassilakis, accompanied by Mr. Y. Miliarakis and Mr. M. Chrisoulakis in charge of the company’s sales, travelled from Greece to receive it. 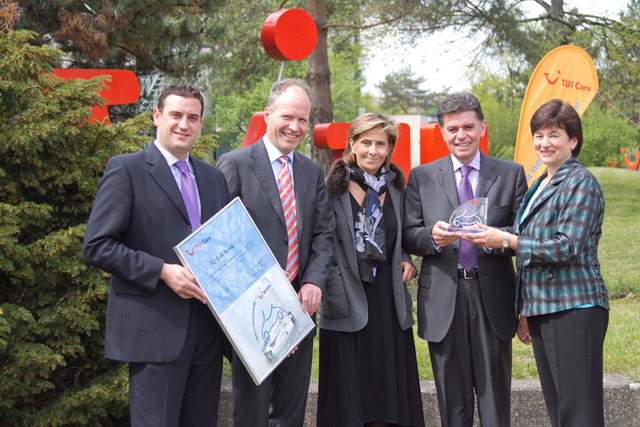